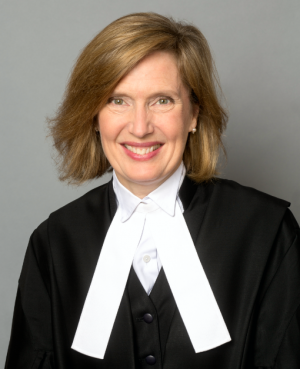 Justice Gail M. Dickson was appointed to the Supreme Court of British Columbia in December, 2006 and the British Columbia Court of Appeal in July, 2015. Prior to becoming a judge, Justice Dickson was one of the two founding partners of Dickson, Murray, a Vancouver litigation firm. She received a Bachelor of Arts and Bachelor of Law degree in 1981 from the University of Saskatchewan and a Master of Law degree from Cambridge University in 1989. Called to the bar of British Columbia in 1982 and the bar of Saskatchewan in 1984, she was awarded a Pegasus scholarship in 1988, appointed Queen’s Counsel in 1998 and made a Fellow of the American College of Trial Lawyers in 2002. She is the former alternate chairperson of the British Columbia Review Board, a former member of the British Columbia Rules Revision Committee, the former chair of the Supreme Court Cameras in the Courtroom Committee and a frequent presenter at continuing legal and judicial education programs. When she was a practicing lawyer, Justice Dickson acted for a wide variety of clients in both criminal and civil proceedings. Over the years, among other things, she was employed as a prosecutor in British Columbia, a legal aid defence lawyer in Saskatchewan and a member of the international law department in the London, England office of Clifford Chance.